Environmental risk factors such as air, water and soil pollution, chemical exposures, climate change are a significant contributor to India’s disease burden. While initiatives like Swacch Bharat Abhiyaan have been undertaken to address some environmental determinants of health, namely access to sanitation and hygiene, much remains to be done to address the many environmental health concerns, which continue to rise with India’s rising industrialization and economic growth.

To address this rising environmental disease burden the Public Health Foundation of India (PHFI) and the Tata institute of Social Sciences (TISS) with support from Tata Sons and Tata Consultancy Services launched a Centre for Environmental Health on May 19, 2016. “Evidence based research is very important as it gives us strength to sensitize people on the issue,” said Mr. J.P. Nadda, Union Health Minister, launching the Centre jointly with former environment minister Mr. Jairam Ramesh. “The government will work in close coordination with the Centre,” he said noting that the research conducted by the Centre will help inform policy making. 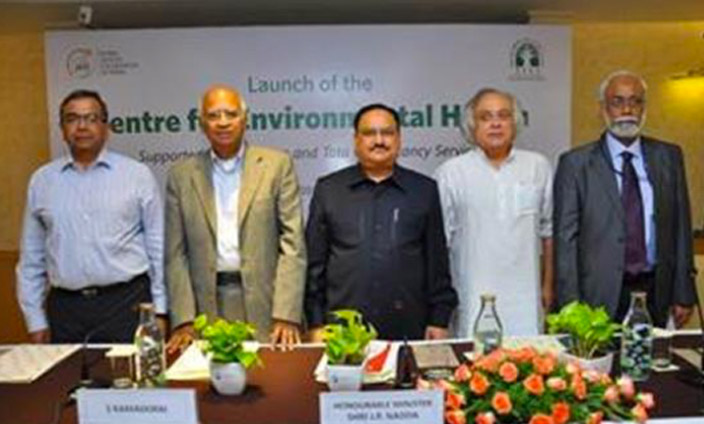 At present, much of the evidence for environmental exposures comes from work conducted in developed countries where exposures are far lower than in India. Additionally, the social determinants of health in India are different from those of the developed world. Therefore, addressing India’s myriad environmental health issues will require evidence from the ground and pathways to turn the science into actionable policy.

Conducting environmental health research will require a cadre of specialized researchers and practitioners, which is currently lacking in India. This is a major gap that the Centre aims to address through its capacity building efforts. Through national and international collaborations, the Centre will establish programs for education and training in environmental health for public health practitioners, community groups and volunteers, and engage in multi-sectoral, cross-cultural action research and policy advocacy.

PHFI and TISS are well positioned to lead this much-needed platform in India for high-quality research and capacity building in environmental health. Over the past few years, PHFI has been engaged in research to address issues related to air pollution, climate change, pesticide use, water, sanitation, and hygiene, while TISS has been in the forefront of studying the social, economic, and environmental determinants of health.

This collaboration is envisaged to catalyze environmental health research and evidence-informed policy making to alleviate the environmental burden of disease in the country.

Despite years of interventions to address tuberculosis (TB), it continues to be a major global health problem. The World Health Organization estimates that in 2015 out of a total of 9.6 million TB cases globally, 2.2 million cases were in India – the country with the highest global burden of TB.

Mycobacterium tuberculosis (Mtb), the etiological agent of tuberculosis (TB), is a leading cause of human disease and death, particularly in developing countries. One strategy for reducing the incidence of tuberculosis has been the bacille Calmette–Guérin (BCG) vaccination, the only TB vaccine currently available. The BCG vaccine is effective in reducing risks of severe tuberculosis in early childhood, but its long-term effectiveness is variable in children and adults. The reasons for this lack of long-term effectiveness is unknown, but a growing body of research indicates that early life chemical exposures
may have a role.

Researchers at the University of Rochester Medical Centre in New York investigated the impact of early life exposure of two chemicals, PCBs and DDE on BCG vaccine response. PCBs and DDE are considered persistent organic pollutants (POPs) as they resist environmental and biological degradation and remain in the environment for long periods, and are known to accumulate in human tissue. Though PCBs and DDE (primary metabolite of DDT) have been banned in parts of the world, they are still a concern in India. Both these chemicals can cross the placenta and mammary glands and therefore can be readily passed from the mother to child.

The researchers analyzed blood samples from approximately 500 mother-infant pairs in eastern Slovakia. The study population was selected from an area with substantial environmental PCB contamination. Mothers were enrolled in the study during child birth and the study pairs were followed for 6 months after the child’s birth. The infants received the TB vaccine within 4 days of birth. Chemical analysis was conducted on the blood samples collected from mothers during delivery, cord blood just after delivery, and blood from 6 month infants; and infant serum samples were used for antibody assay. At 6 months of age, researchers found that infants with higher concentrations of PCBs and DDE had lower levels of BCG-specific antibodies. Lowest antibody levels were found in infants with high levels of both chemicals. The lower antibody levels in highly exposed children found in this study indicate a weakened response. However, it is not known if the weakened immune response is indicative of a lower efficacy of the BCG vaccine.

These findings suggest that environmental chemicals may be playing a role in immune disruption. Though the mechanisms of such a disruption and their implication for vaccine efficacy remain to be determined, these findings may have particular implications for India where DDT is used for malaria vector control, and where tuberculosis rates are the highest. Further, this evidence highlights that environmental exposures may play a role in the infectious disease burden of India.

Cities in India are no strangers to warm temperatures. But climate change induced heat waves compounded by the urban heat island effect due to rapid urbanization is causing Indian cities to experience higher temperatures for longer durations. The rising temperatures pose a threat to human health, especially to the vulnerable populations including children, elderly and the poor. The Indian Institute of Public Health, Gandhinagar is helping communities address this issue and reduce the burden of heat-induced morbidity and mortality. In partnership with multiple stakeholder groups, they successfully launched South Asia’s first Heat Action Plan – The Ahmedabad Heat Action Plan. In the years since the launch of the heat action plan, there have been fewer city-reported deaths during Ahmedabad’s annual heat season, temperature forecasts and corresponding heat alerts have been accurate, and efforts to reach more vulnerable populations in the community continue. 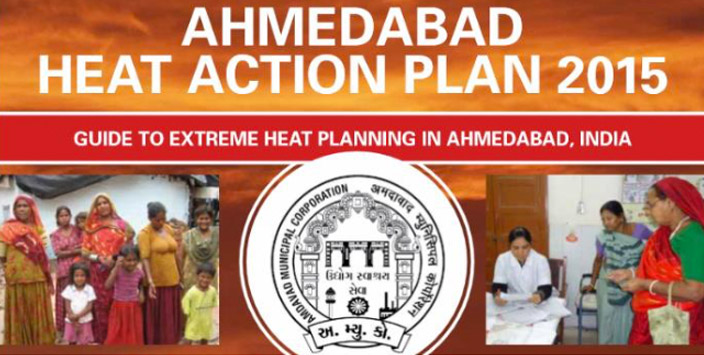 We spoke to Dr. Mavalankar to learn about the efforts that went into development of the Ahmedabad Heat Action Plan and steps being taken to ensure its sustainability.

CEH: Thank you joining us today. Can you describe the genesis of the Heat Action Plan (HAP) effort?
Mavalankar: A major heatwave occurred in Ahmedabad in 201. Close to a 1000 people died. People wanted to do something to address the crisis. In 2011, a joint workshop between Indian and US scientists and policy makers brought together experts and interest groups to work on heat related mortality and morbidity. Following the workshop, we undertook some research to look at the connection between heat and mortality and found a correlation between heat waves and high mortality.

CEH: How did you engage the stakeholders?
Mavalankar: Following the workshop, we signed MoUs between NRDC and local, state, and city governments. The signing happened during the Vibrant Gujarat Summit which gave it a desired visibility.

CEH: Did you add any new stakeholders since you began in 2011?
Mavalanakar: Other US institutions like Emory and Georgia Tech, Indian Meteorological Department (IMD), local hospitals, Maharashtra State Government, which wants to replicate the plan, Orissa Disaster Management Authority and IIPH (Bhubaneshwar) have joined us since we began work in 2011.

CEH: How are you ensuring sustainability of this effort?
Mavalankar: Sustainability will depend on the uptake of the plan by city, state and central government. Each state or city government will need to develop their own HAPs. Through our advocating with IMD, we have convinced them to predict heatwaves for more than 100 cities since 2016. We are working with the National Disaster Management Agency (NMDA) and convincing them to take up development of HAPs at a national level. Multiple efforts are ongoing to build local capacity and convince local and state governments to put in systems and money required to take this up in a long-term sustainable manner. At a recent meeting in Colombo, the World Health Organization and the World Meteorological Organization joint office convinced other regional governments in S. Asia to develop and implement their own HAPs.

CEH: How does the plan address extreme heat exposure of vulnerable populations?
Mavalanakar: The plan increases the general heat awareness of the communities with special focus on efforts to raise awareness of vulnerable populations. For example, slum dwellers and street hawkers, were made aware of problems of heat exposure. We conducted training programs with traffic police and occupationally exposed people. The current Mayor of Ahmedabad has taken a special interest in this effort. Through city government mechanisms, jute bags were distributed to slum dwellers to keep their roofs cool. Through NGOs working in the slums, we conducted focused information, education, and communication (IEC) to raise awareness of extreme heat events among the slum communities.

CEH: How did you reach media dark areas?
Mavalankar: We have not yet reached everybody, especially the poor people. NGOs working in slum communities have been key partners. They used their networks to reach this hard to reach population. Municipal health department used its network of volunteer health workers. Then there was person-to- person spreading of word and distribution of leaflets.

CEH: Are there similar heat action plans elsewhere in the world?
Mavalankar: The extreme heat events in Chicago (1995) and in Europe (in 2003) were wakeup calls in response to which many US states and EU countries have developed their own HAPs.

CEH: How is the Ahmedabad HAP similar or different from these?
Mavalanakar: The Ahmedabad HAP was developed based on learnings from these plans but adapted for local needs of a developing country. Unlike the developed world, we don’t have elaborate disaster management authorities, so our approaches are different. We conducted vulnerability studies to understand the needs of the ground and identified best methods to reach masses.

CEH: What do you think are some salient features of the Ahmedabad HAP?
Mavalankar: These include a heat alert system which gives a 3-5 day warning of extreme heat events; training of medical staff to manage heat emergency situations; public awareness – dos and don’ts during heat waves; public awareness of remedial action to take in case of heat stroke; during peak summers cooling shelters were opened for the public, night shelters were also kept open for public to take refuge in; and water for drinking and cooling off was made available to the public.

CEH: What advice will you give other states and cities who would like to implement the HAP?
Mavalanakar: Commitment and buy-in of local government and institutions is key for successful implementation of HAP.

CEH: Given that implementation of programs can be a challenge in India, what do you think attributed to the success of the implementation of the Ahmedabad HAP?
Mavalankar: We attribute it to the monitoring of daily mortality data during heat extreme heat events and follow up with emergency ambulance service.

“Extreme heat events are an important environmental concern. Heat waves will increase in the future and we will have to deal with them. It will be important to plan in advance and plan properly to alleviate human losses due to heat waves.” – Dr. Mavalankar